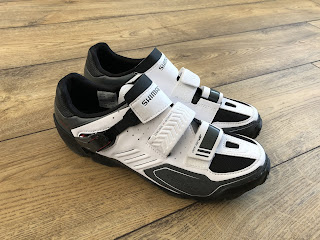 If you’d seen the couple of videos I’ve done you’d have noticed my Shoes! Well couldn’t help it really as most of the video is my feet spinning around lol. Anyway they were quite worn and had a bit of flex in them so they were nice to also walk around in, I could never get on with the road shoes, was like skating on ice to walk in. One thing I have noticed on the ICE Sprint though is that when putting pressure on the pedals I could feel a lot more of the flex in the sole compared to riding upright?  Still not sure why that would be the case but suspect it more that I used to spin a bit more upright and now on the Trike I’m changing my style to a bit more power based pedalling? Not sure I want that but seems I’m doing it by default, I might make an effort to try and spin a higher cadence next time out. So I always struggle with cycling shoes as they vary so much, I’ve had a good fit in one make at 43 and then needed a 45 in another? Don’t get me started on widths. Don’t get me wrong I haven’t got Hobit feet but there are a little wider than a ruler , which seems to be the width of most cycling shoes! Sorry I digress. I came across a pair of Shimano MD 163 W in 45 which were a tiny bit long but as I wear thick socks (due to Raynaud ),the added bonus was they have a great torsion bar in the sole. Cleats fitted and a quick test cycle has confirmed these seem much better. And in the sale they were only £45!