It was a restless, nervous nights sleep but the cabin bed was comfortable. We were about a couple of hours from St Malo so I thought I’d check out the weather on deck . Oh... wet,  grey and misty 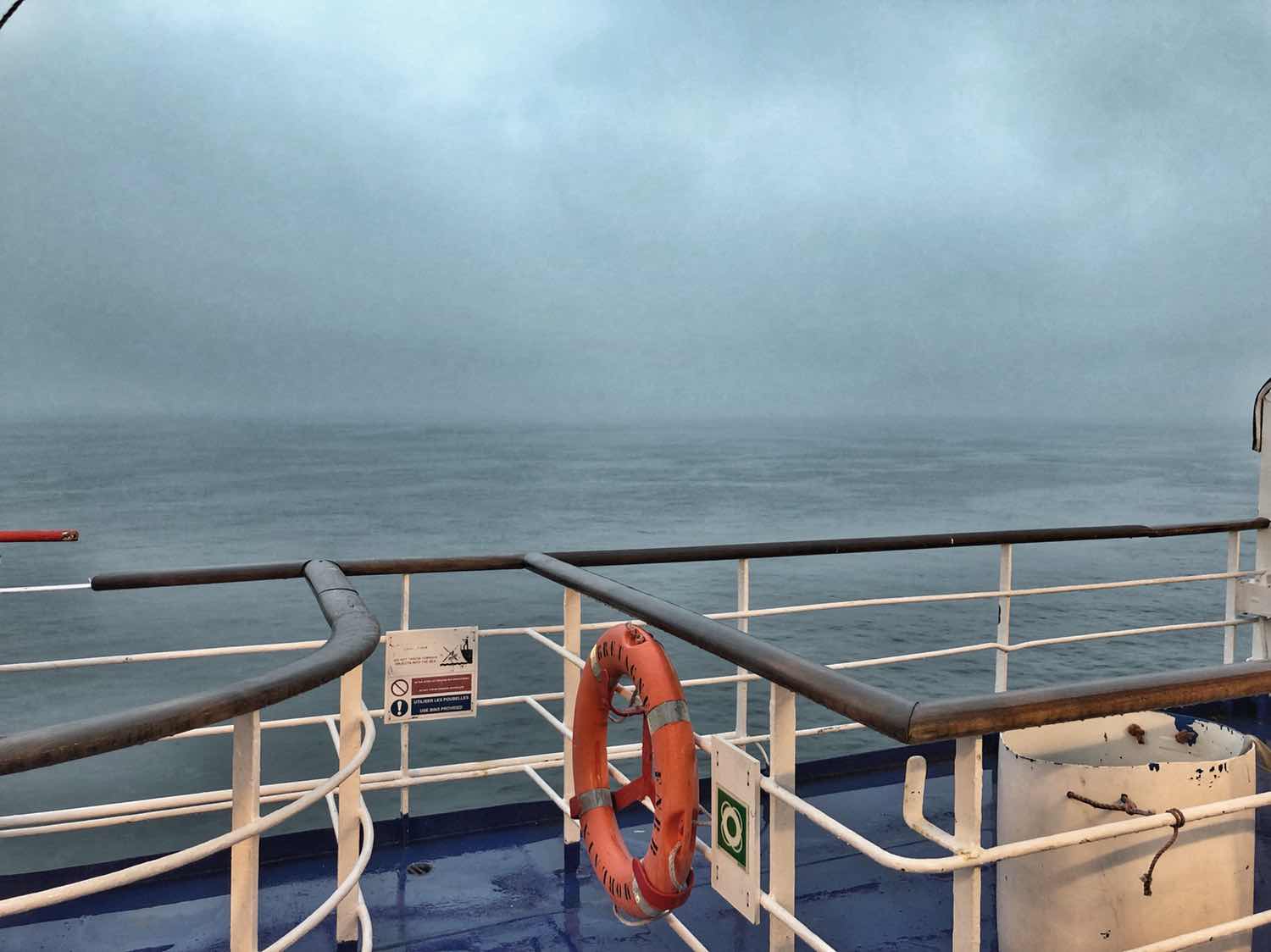 Suitable kit dug out , I went down for breakfast. Full English was called for and a coffee and it wasn’t too bad.
First off the ferry and a few minor detours later I was on the open road. 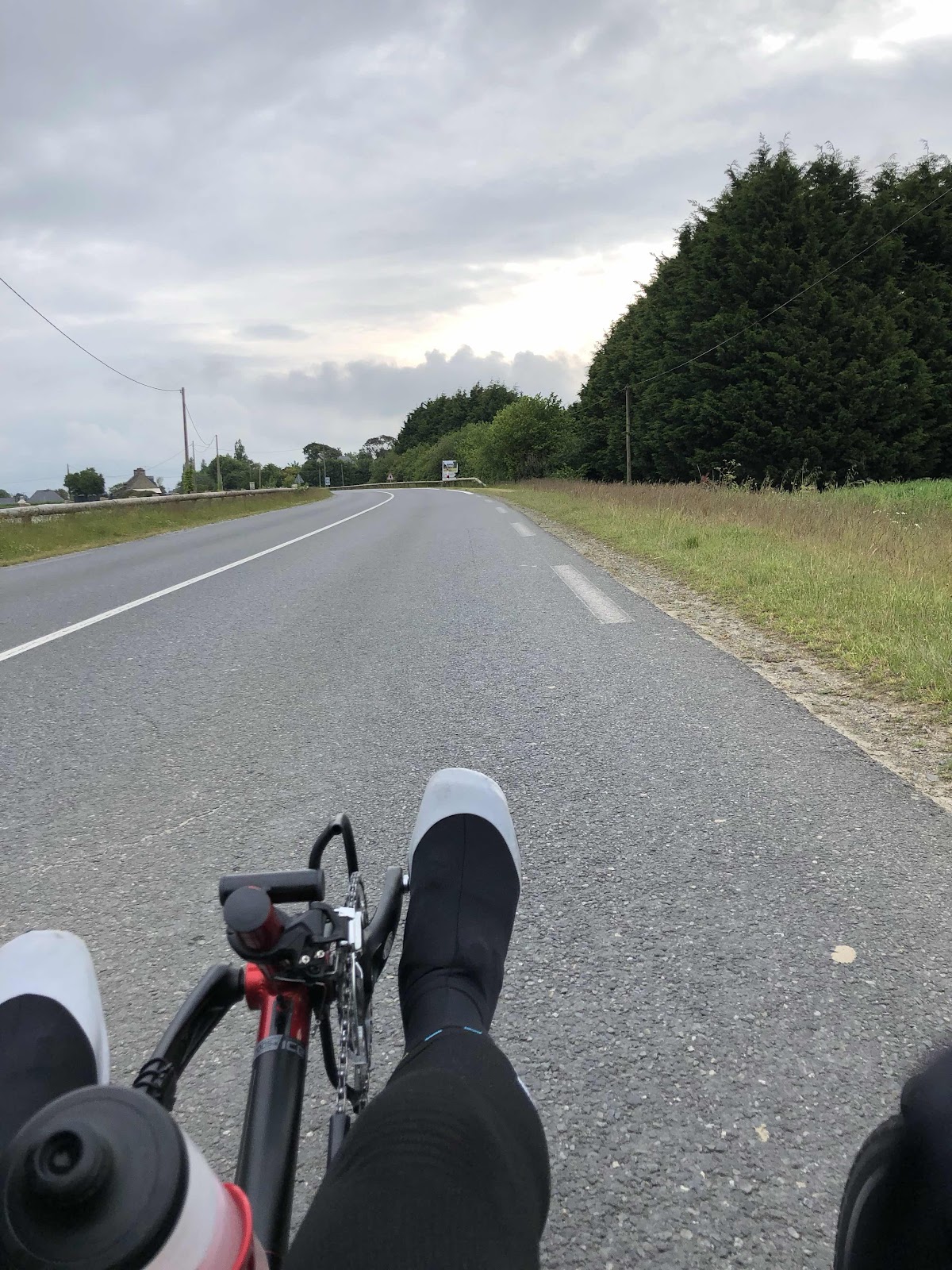 It wasn’t long before I met a man on a bike coming the other way. He couldn’t have been more French if he’d had a string of onions and a beret. Riding a bike, that I’m sure was from the war, he wore a brown, home knitted jumper, with holes and stains that indicated it was also from the war. Cigarette hanging out of his mouth and a complexion that was clearly a mix of suntan, non washing and engine oil. I raise my hand and in my best French I chirped ‘Bonjour’ smiling widely... to which I got a gruff ‘morning’... ah well 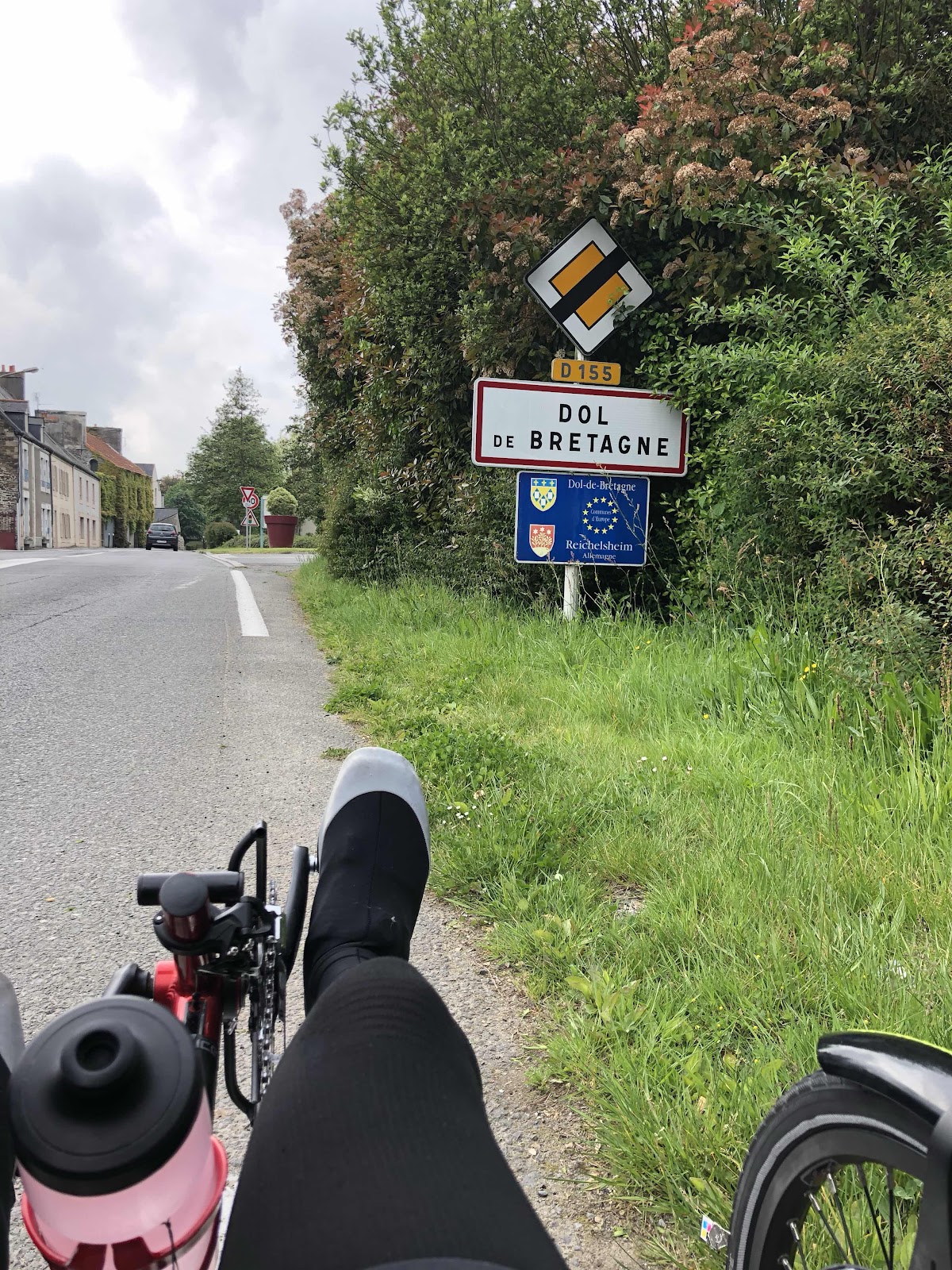 I was soon passing through Dol de Bretagne ( Lizzie and I came here many moons ago ) Made me smile.
I was surprised by how quiet the D roads were brilliant  and all the drivers were giving me loads of room, bonus👍 then I saw this 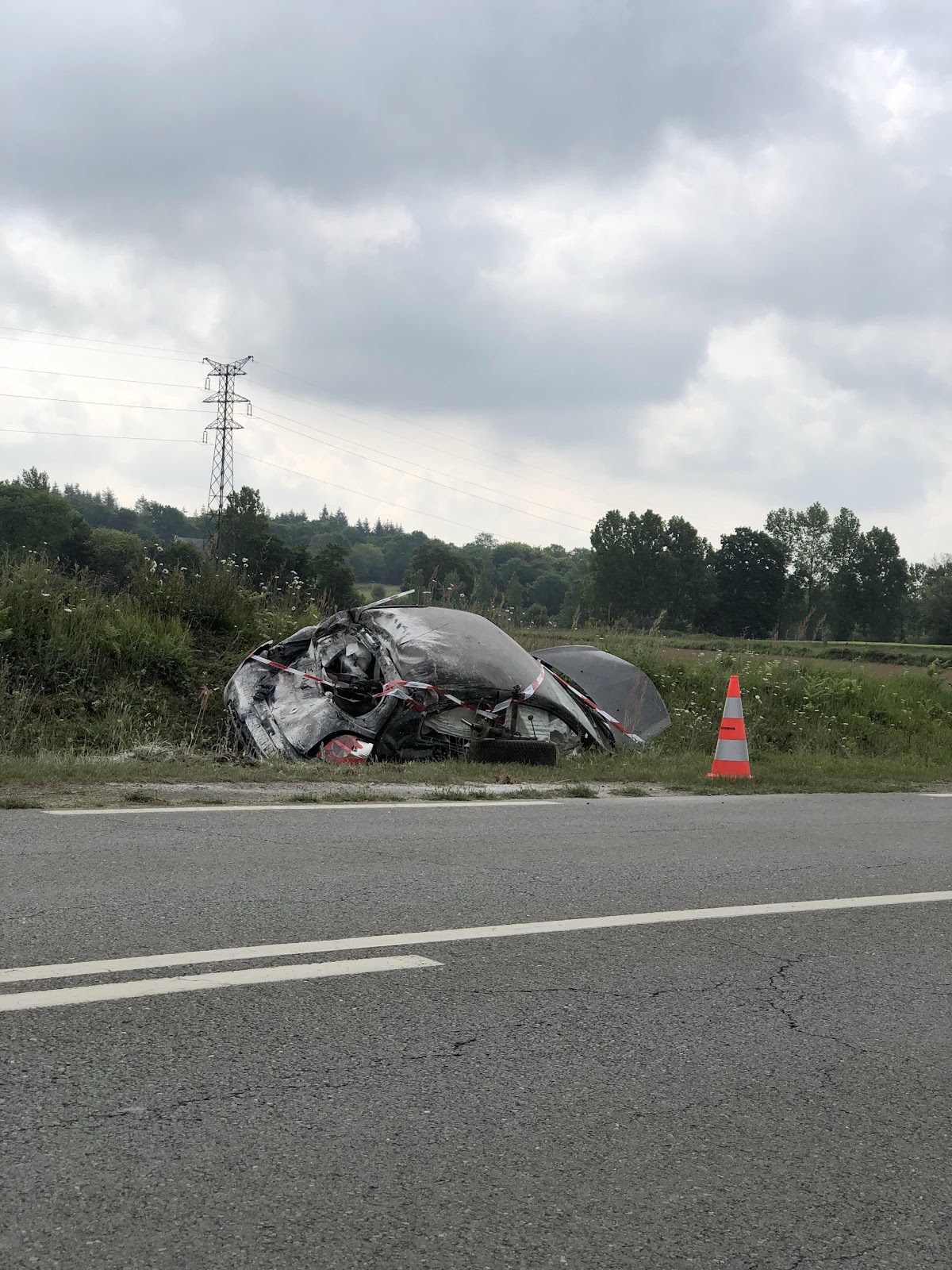 Ok I’ll keep me eyes open. Keeping up my fluids also meant more PR stops but at least there was nobody about . It was about this time the ELO popped on the ears phones,  I only have them on low so I can still hear the traffic, not that there was any. “ Hey there Mr Blue sky” ... Jeff you’re gunna have to try a lot harder I thought to myself .  I pulled over for yet another PR stop .. sorry for those that haven’t read my previous blogs from JOGLE and LEJOG, PR is my abbreviation for Paula Radcliffe, who famous just stopped in the London marathon, pulled her shorts to one side relieved herself and carried on... if it’s good enough for Paula.. Anyway I digress.
It was time for a coffee 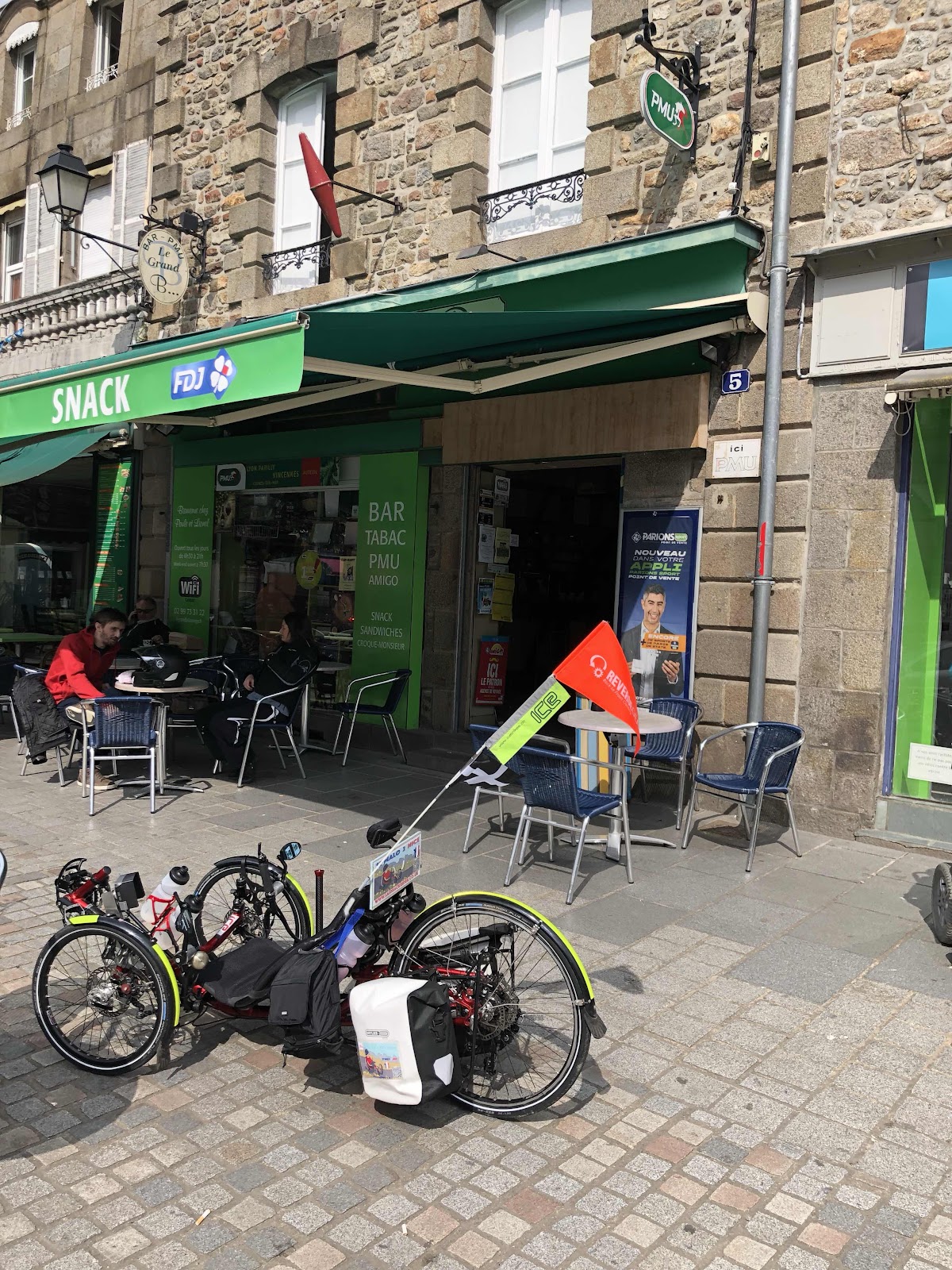 As you can see from the shadow in this shot Jeff and ELO were doing there best , there was a bit of “sun is in the sky” but they were still failing miserably on the “ there ain’t a cloud in sight” part . Having got my coffee and ham roll I was shortly approached by a group of older gentlemen, all smiling nodding and lots of “ Bon , Bon” I was then ushered to take a seat back on the Trike indicating he wanted a picture. Of course I smiled and obliged and he got his photo, and his mate and his other mate and another, who ushered over another. I felt like a celebrity!! The original chap thanked me and muttered “ St Malo Nice grandes jambes” Now my French is shameful but I’m pretty sure that’s what he said and when I typed it into the phone to get a translation I found out that it meant ‘great legs’ I chuckled to myself I know I shaved them and everything but I’m not sure they’re that great !
Moving on towards Rennes , lots of ‘real’ cyclists waving and smiling I was soon on another wide, straight empty road. Oh I thought there’s two cars coming towards me (dual carriageway maybe)
Then out pop a white van ... yes three abreast coming towards me . With the image of the car in the ditch and my family’s parting words “ have an adventure and be safe” ringing in my ears I brought the Trike to a stop at the side got off and stood to one side. Now let’s not get all dramatic the road was wide , admittedly it was only one carriage way each side . One car was overtaking another but clearly white van man thought he could take them both, thus saving some time . And by the look on his face as all three sped pass, he wasn’t giving in!! Still I learnt three things, one there would have been enough space if I’d stayed on the Trike , that caution is sometimes the best approach and that white van drivers appear to be the same all over the world.
As I passed through yet another little village the bells struck 12:00 and I’m not lying I saw three different shop keeper come outside and all put their shutters down... seriously! Two gave me that look of “ you’re not from round here” look as if there was ware wolf on the loose or something.
In Rennes at the Fete Du Velo I was met by Pierre from Velofasto who specialise in trikes and recumbent bikes . It was great to say hi and chat over a crepe. Thanks 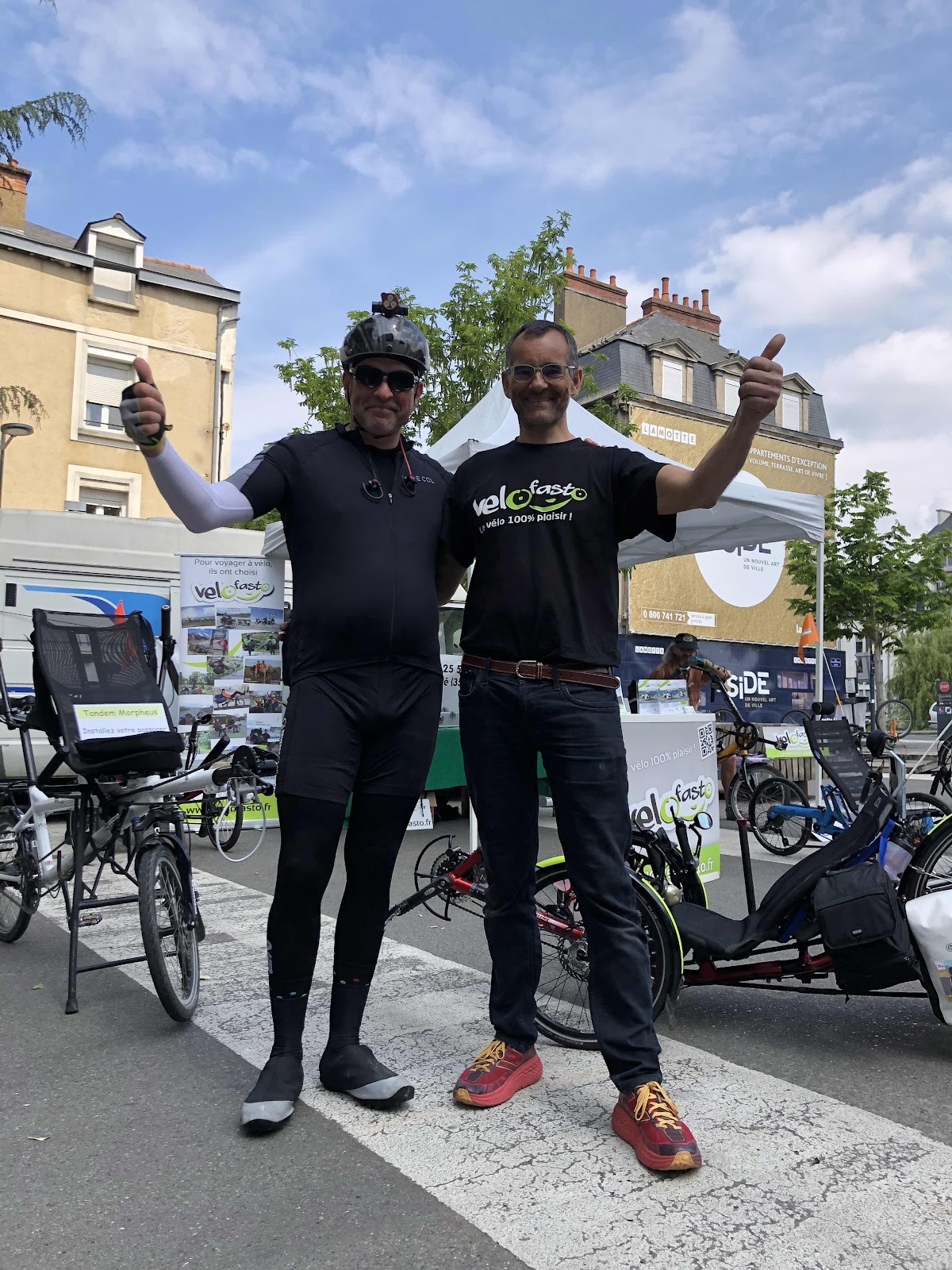 There were some very strange home made bikes as well 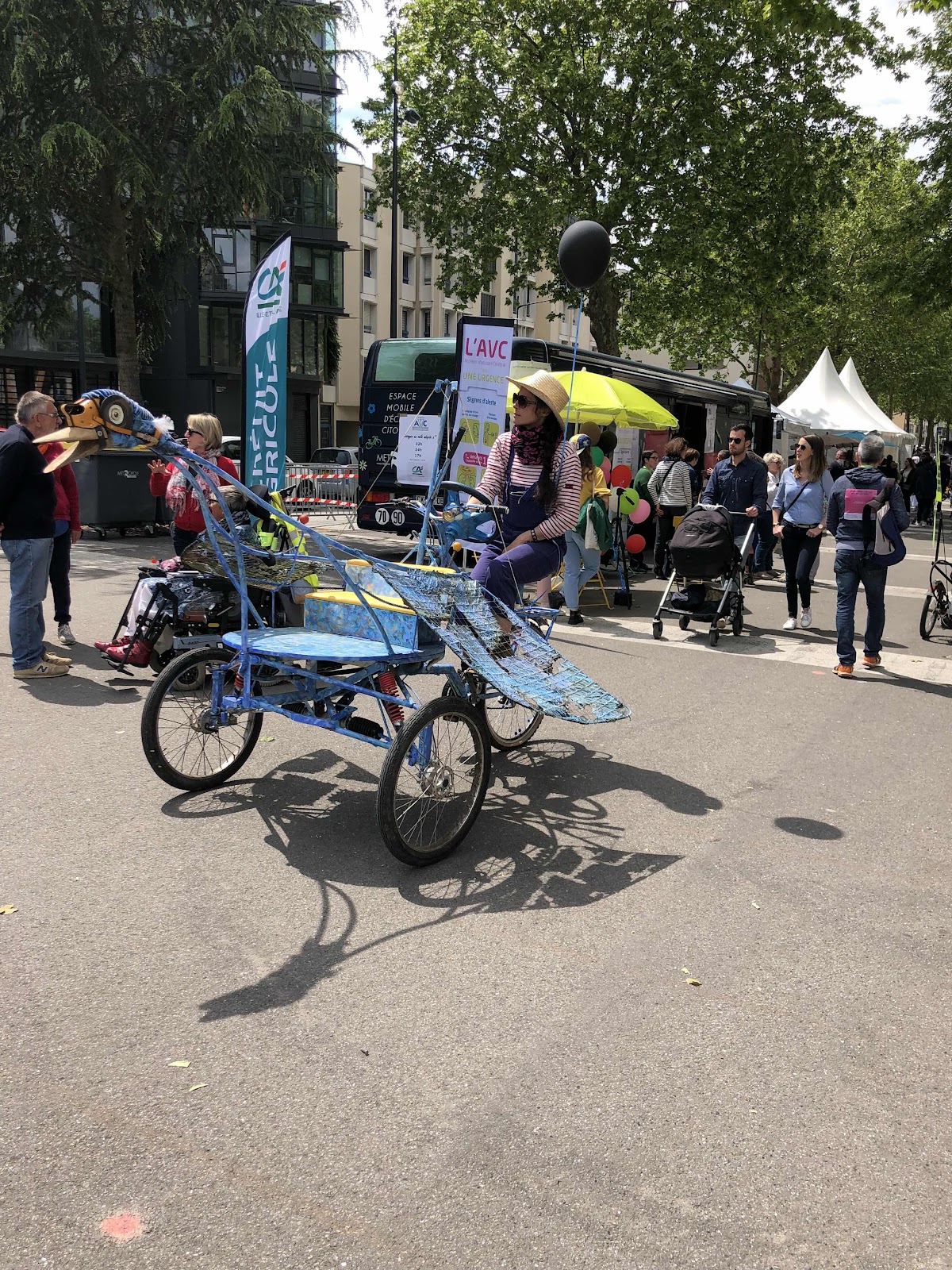 Onwards .. it soon became apparent there were less and less cars and no people. 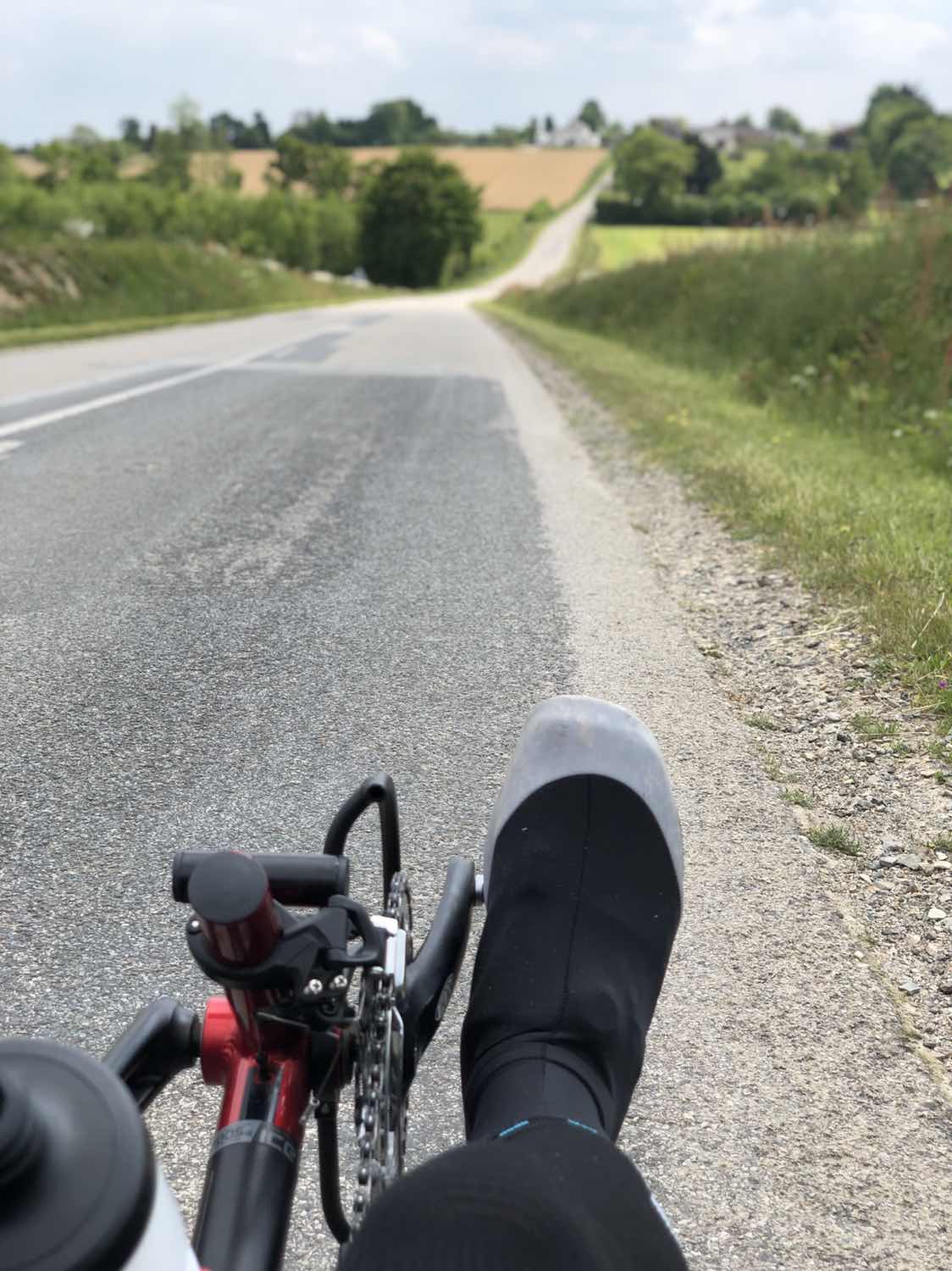 It was ridiculous, I thought back to the town shutting up and now wondered if it was some sort of apocalyptic event  but a swift stop and check of google indicates no apocalyptic event and this is just France 🇫🇷 These are the weird and wonderful thoughts that go through your mind on long rides!
So the last 15 miles are always longer than the others but I eventually got to my Air B&B . My hoasts Dave and Jackie  have been nothing short of spectacular , so generous and kind if you are ever in need look them up you won’t regret it
So Day 1 in the bag  86 miles and 3200 ft 👍🇬🇧🇫🇷😂 let’s see what tomorrow brings