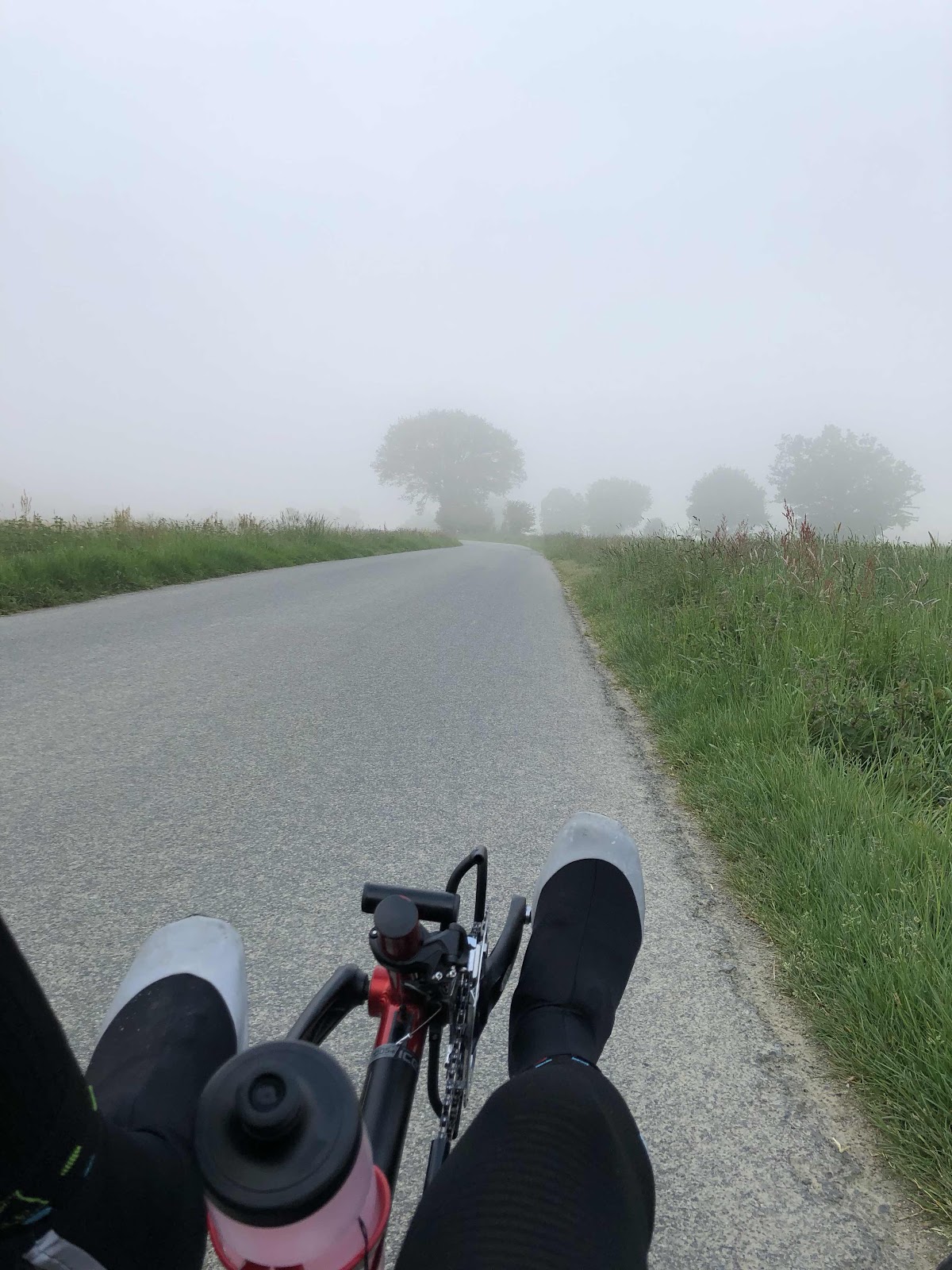 It was reluctance I pulled myself out of bed this morning.It was misty outside and  Jackie and Dave at the B&B had fed me to within an inch of mylife and the room was SO quite and comfy. But rise I must.. there was a full English waiting for me . Along with tails of wild boar in their garden from time to time with deer and hares etc they informed me that today would probably be as quite as yesterday, oh and don’t forget they’ll be no lorries. “No lorries” no after 23:00 on Saturday there are no lorries allowed on the road for 24hrs !!! Seriously we have got it so wrong . I said my goodbyes and set off about 07:20. Sure enough I soon saw hares and deer bouncing off into the mist but luckily no boar. The beetles ‘Here comes the sun’ popped on top the headset and I pondered whether they would do any better than ELO. 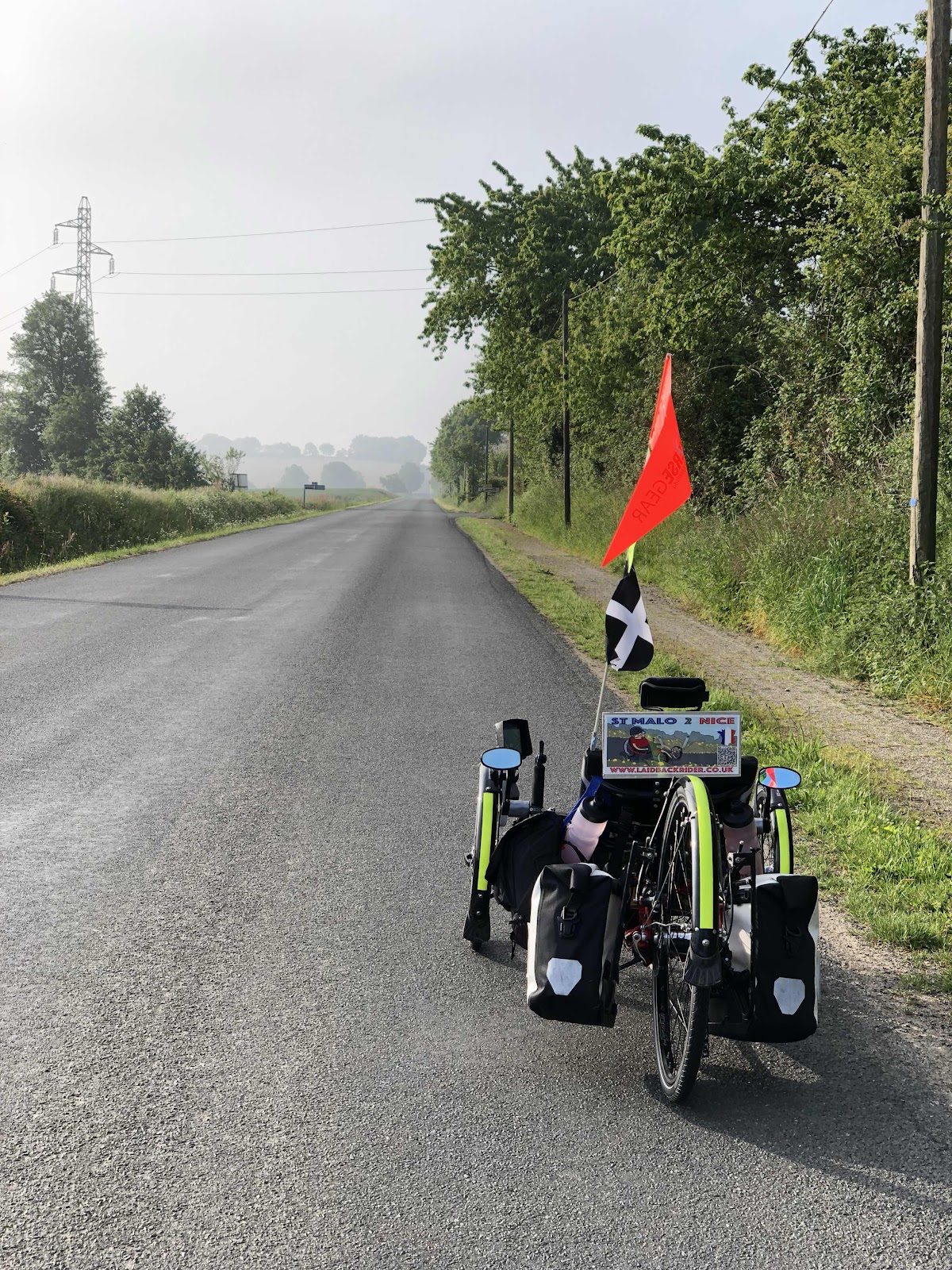 It wasn’t long before I found myself on another glorious road and after an hour and a half I’d seen 7 cars. I was now playing the game I’m just going to stand here and have my PR stop I can see both ways I don’t even need a tree!! ( check out day 1 blog for details) that keep me amused for a while. Then the Beetles had a go and got a hazy sun out 😁 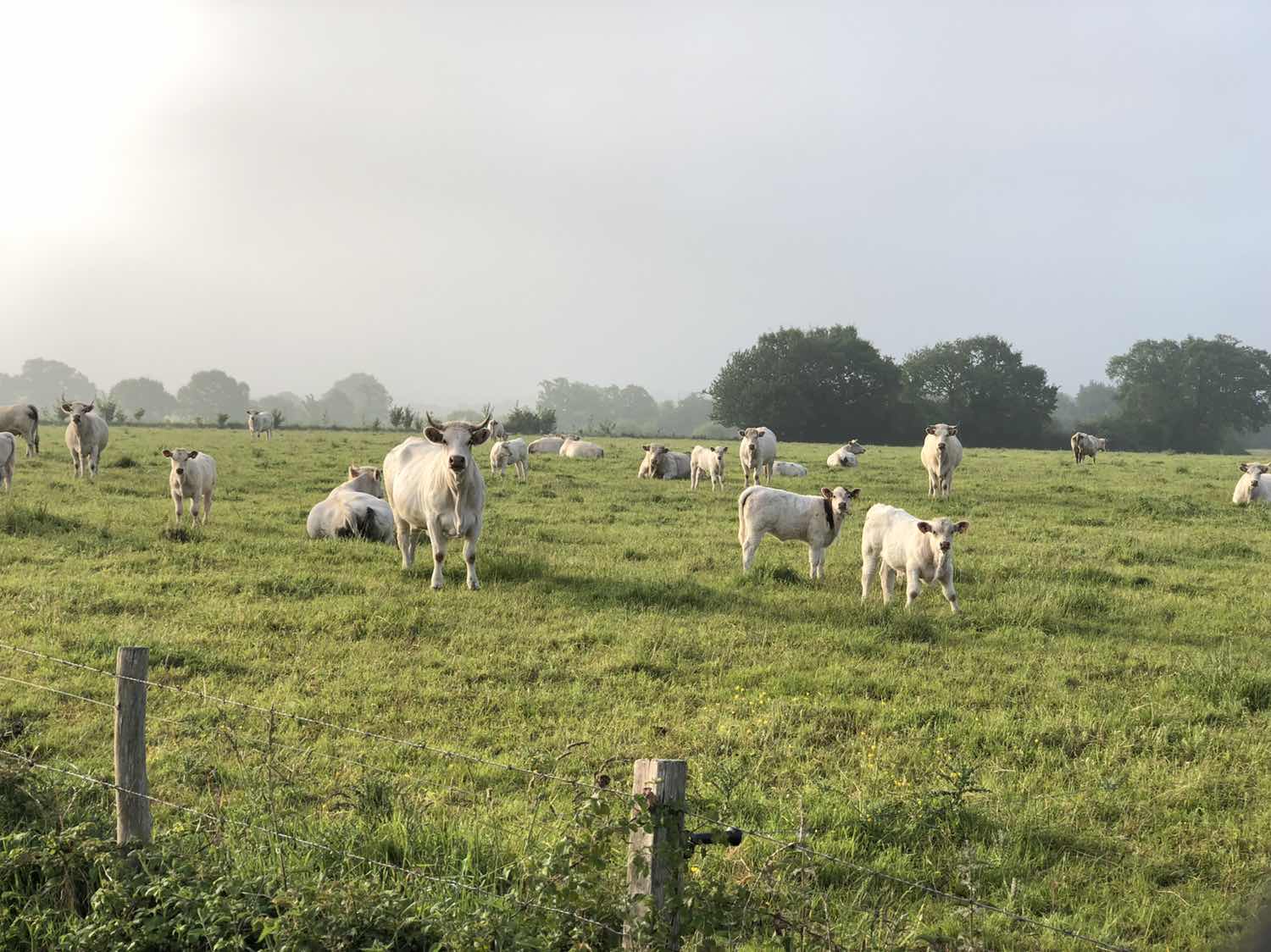 With serious lack of activity I decided I would have to stop whenever I could find something. So even though it was just a few hours since breakfast ( and Jackie and Dave had insisted on making me sandwiches) I stoped for some water and a pastry. Near a remarkable church 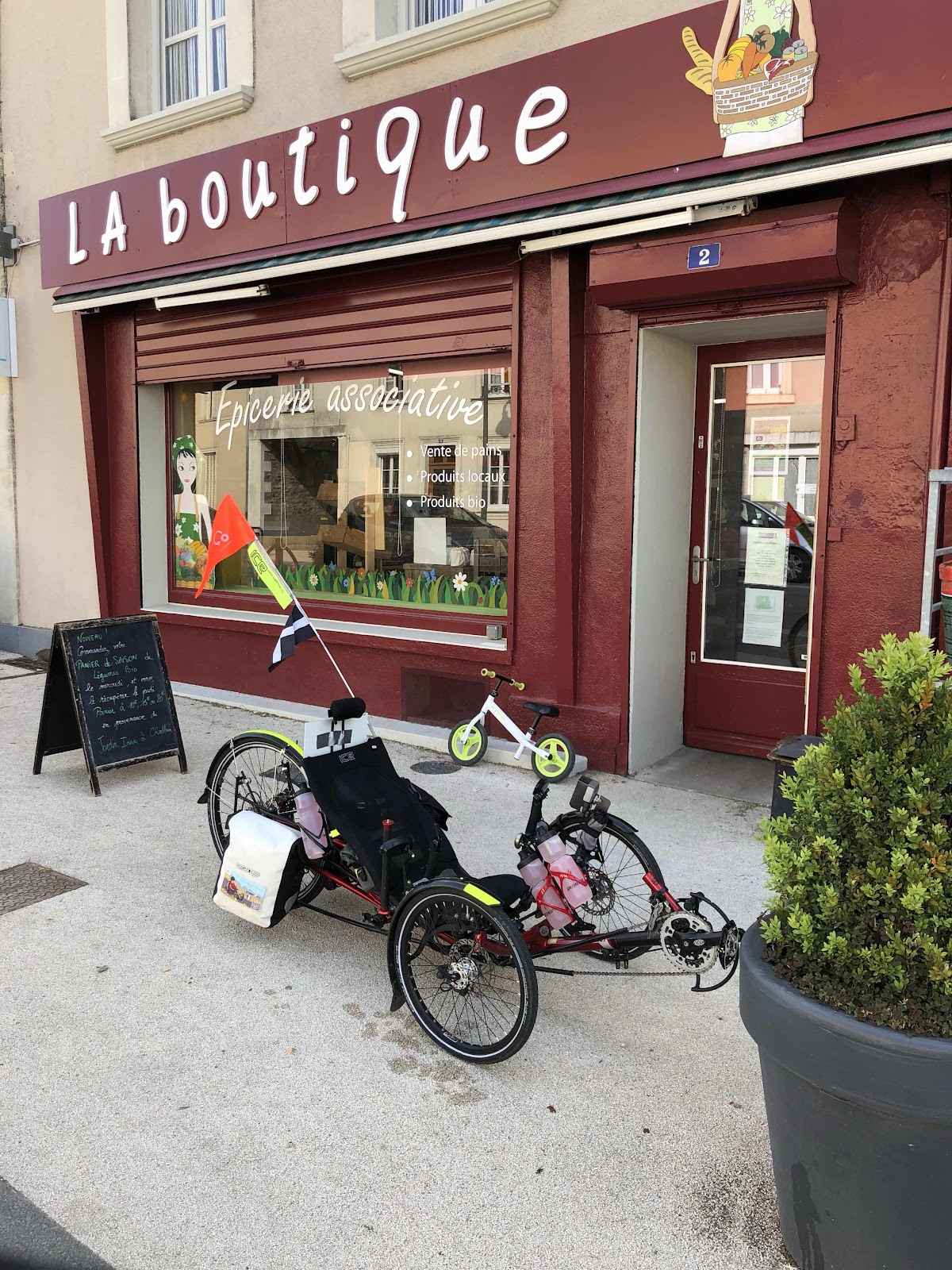 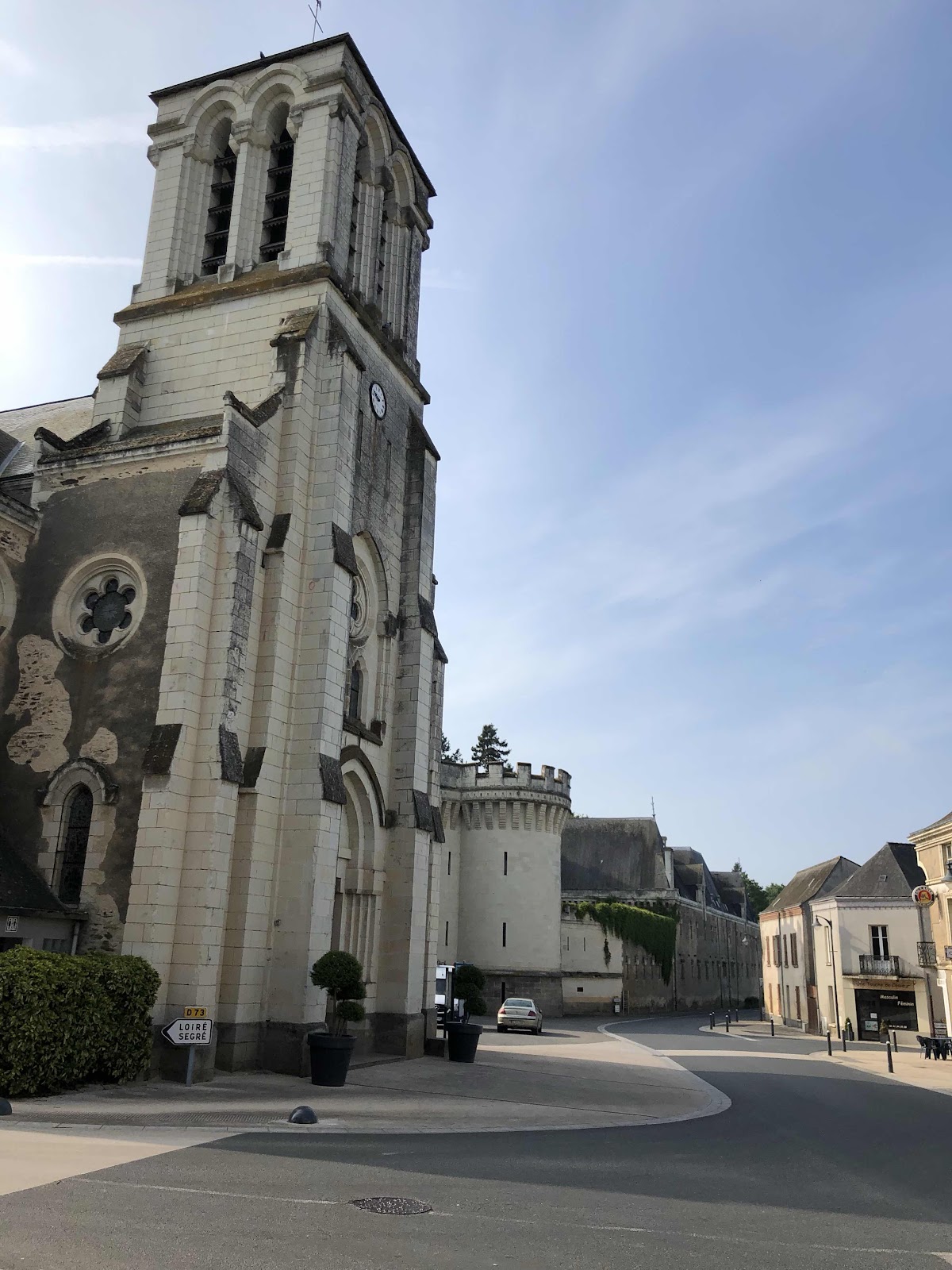 I set off again and turned next to the church literally 100 feet and came across this . 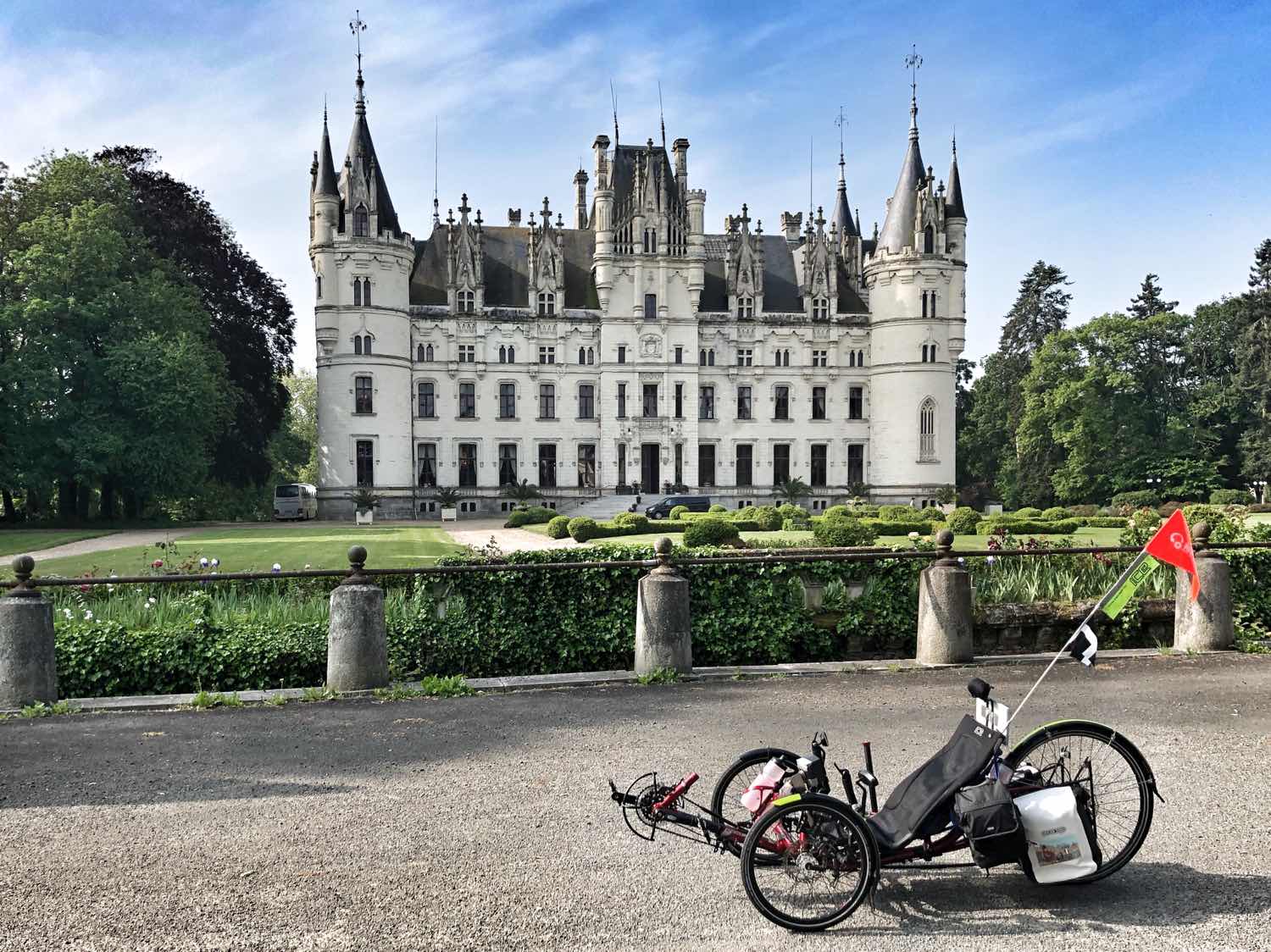 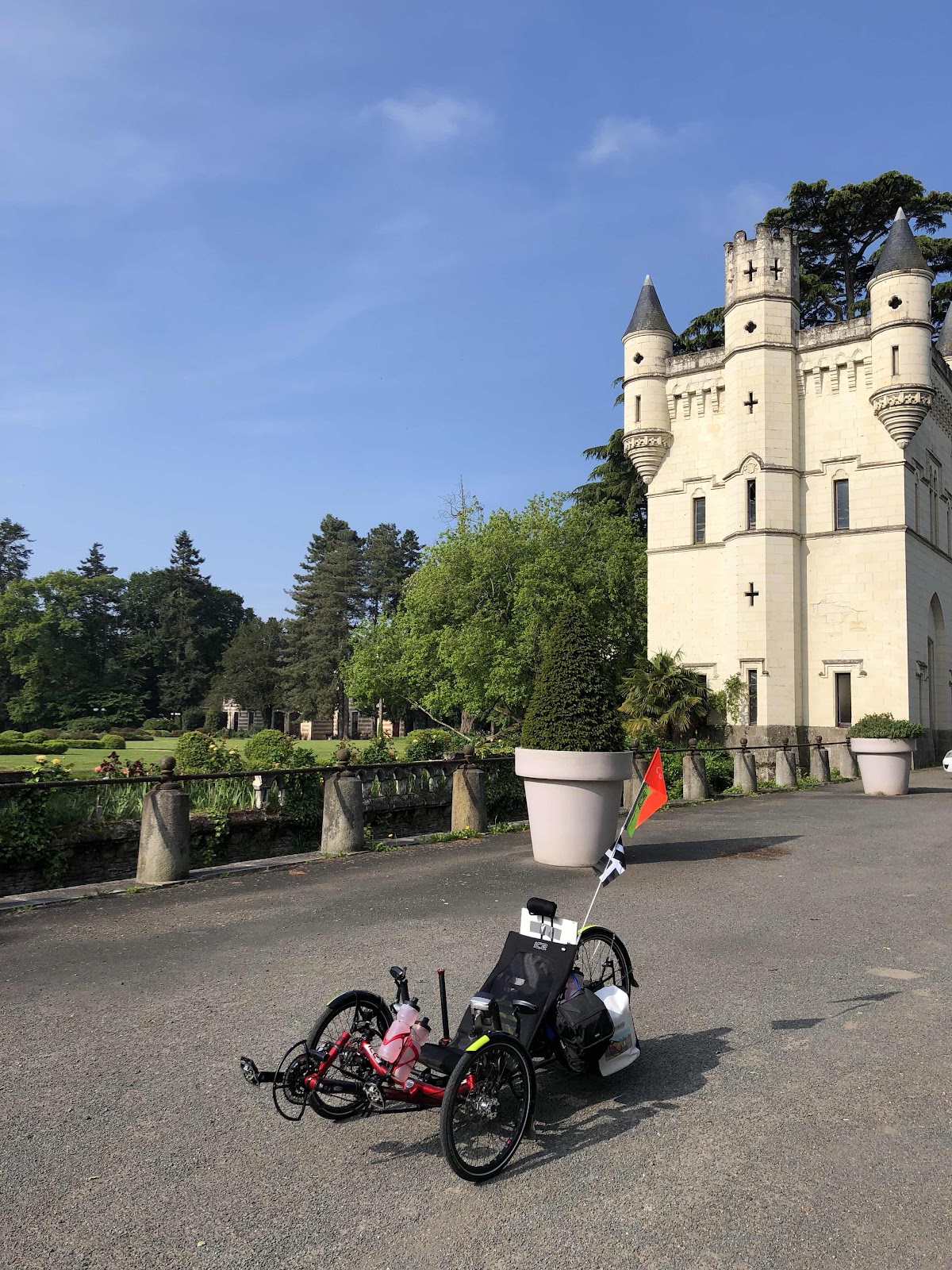 I had to stop and take it in 😁
So it was about 10 o’clock now and rush hour hit probably about 10 cars every half an hour .. how would I cope!
Back out onto some more straight road . The Beetles has given up and the sun was gone but there was a slight tail wind 💨 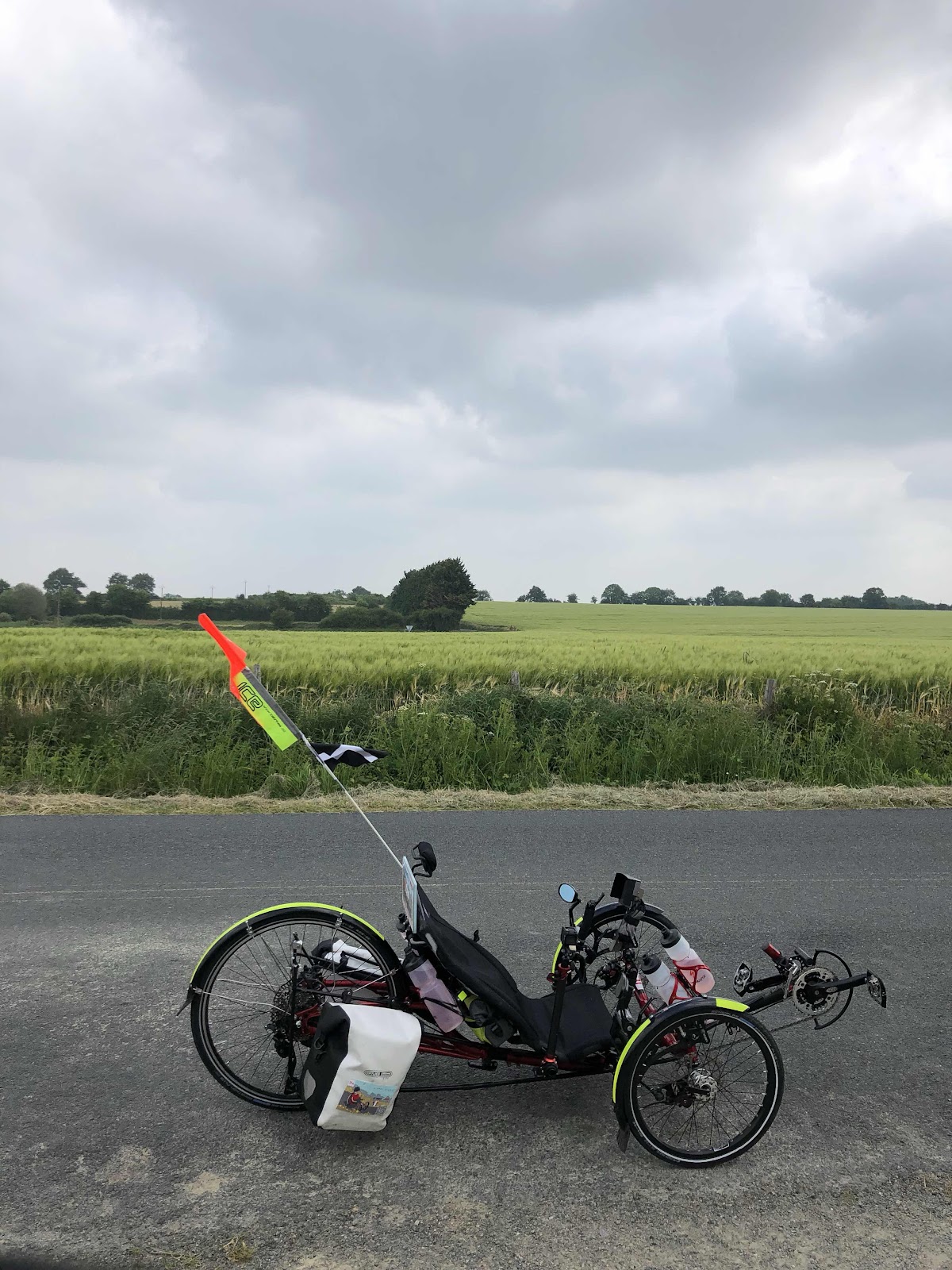 My mind wanders and I play one last game of in the middle of the road PR.... wasn’t even close to getting caught short had a full 20 minutes before the next car came... I hope nobody’s offended 🥴
So I was soon... well I say soon it felt like an eternity to be honest... on the approach to Angers. I hadn’t planned on coming through any big towns if I could help it but it was too many miles to avoid really.
The cycle lanes here are brilliant I thought though 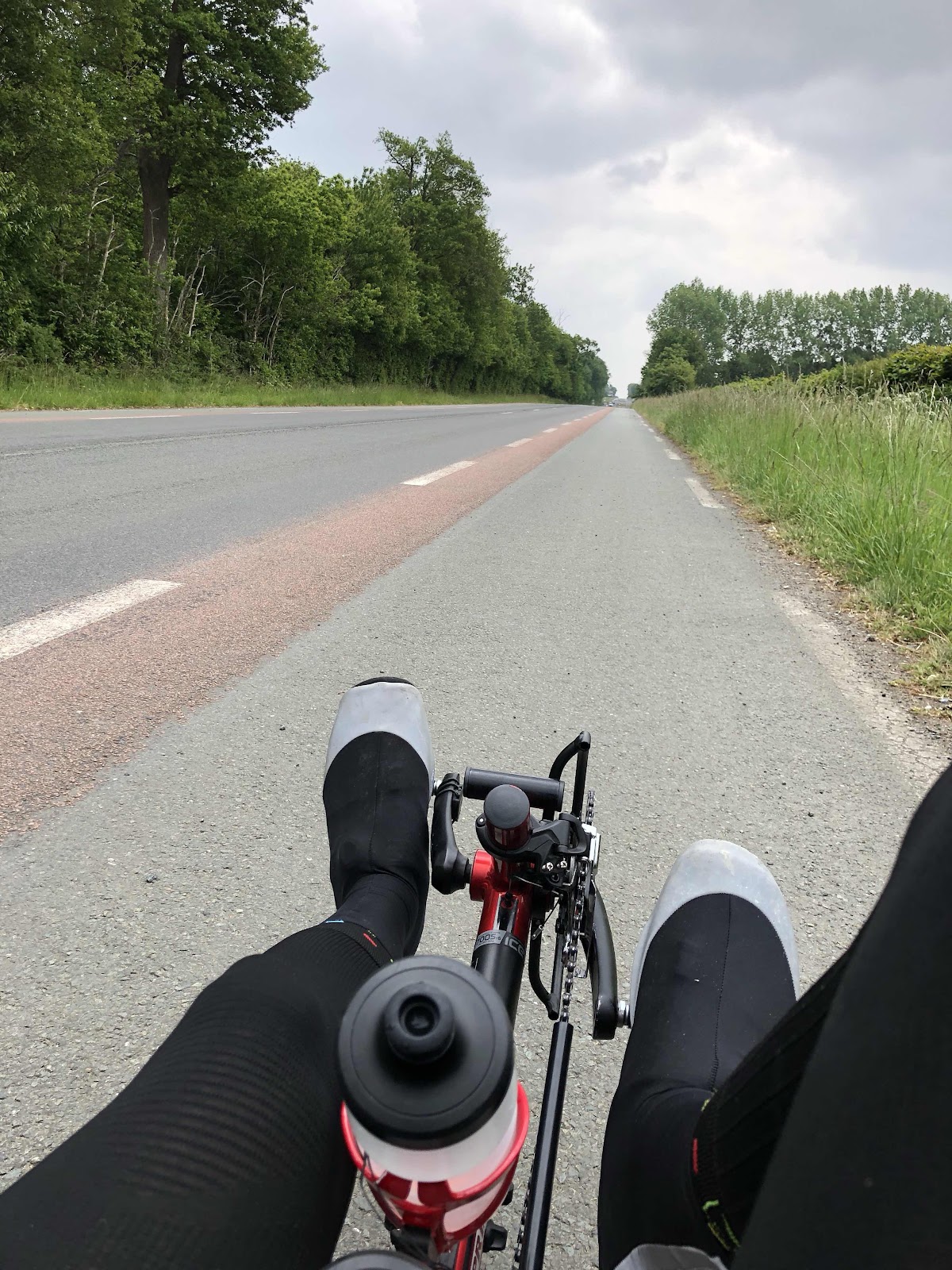 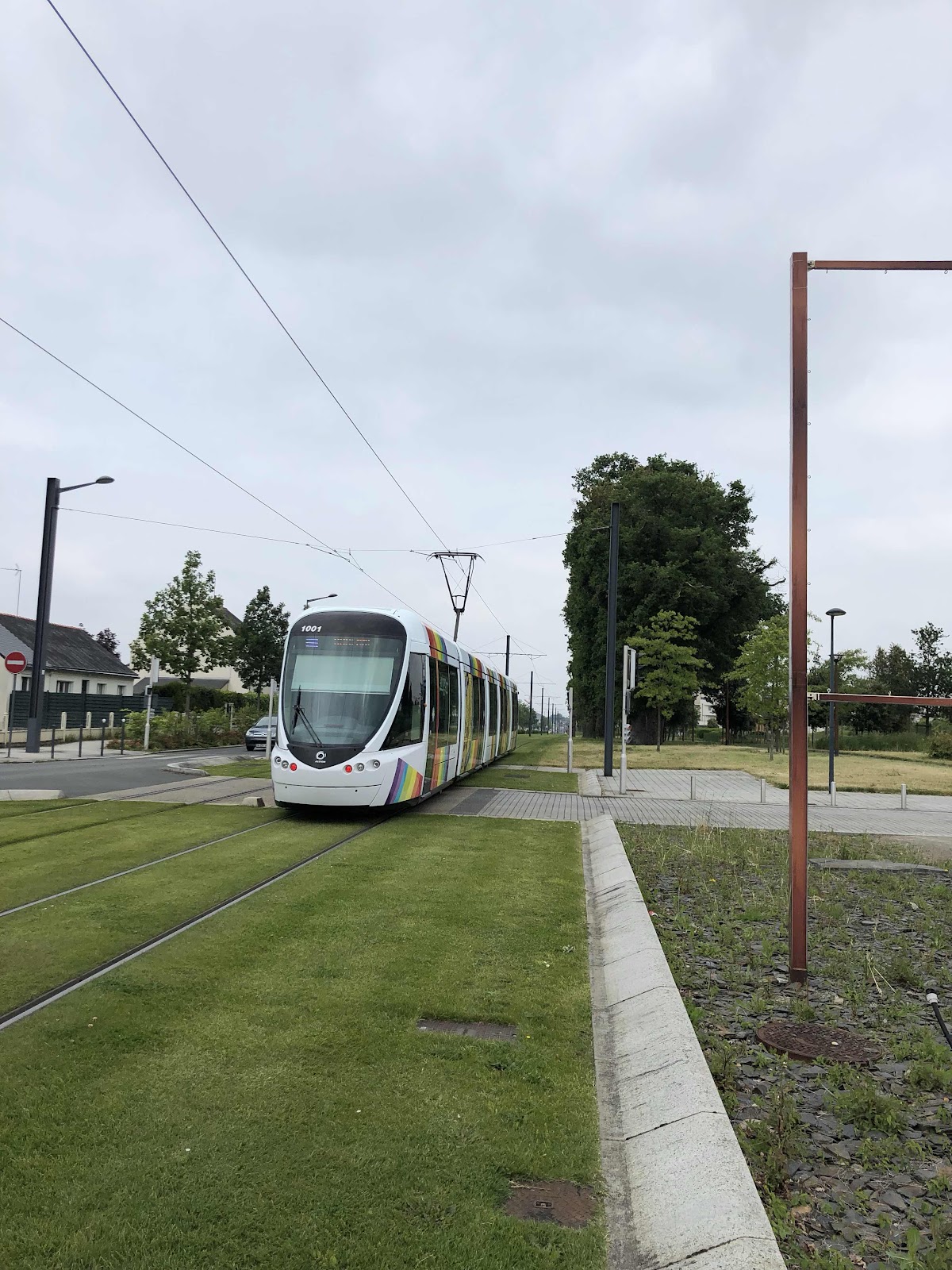 A brilliant tram system 👍👍until I came across a strick non bicycle beyond this point a couple of make shift detours and I came out a bit further down on a cycle lane..  that again ended 🥴 now as city’s goes it wasn’t that bad, roads were nowhere near as good as the country roads tarmac wise but it wasn’t busy by any stretch and I managed to come out the other side. If you do plan on coming on s similar route I would however route round this place.
Then the Loire... 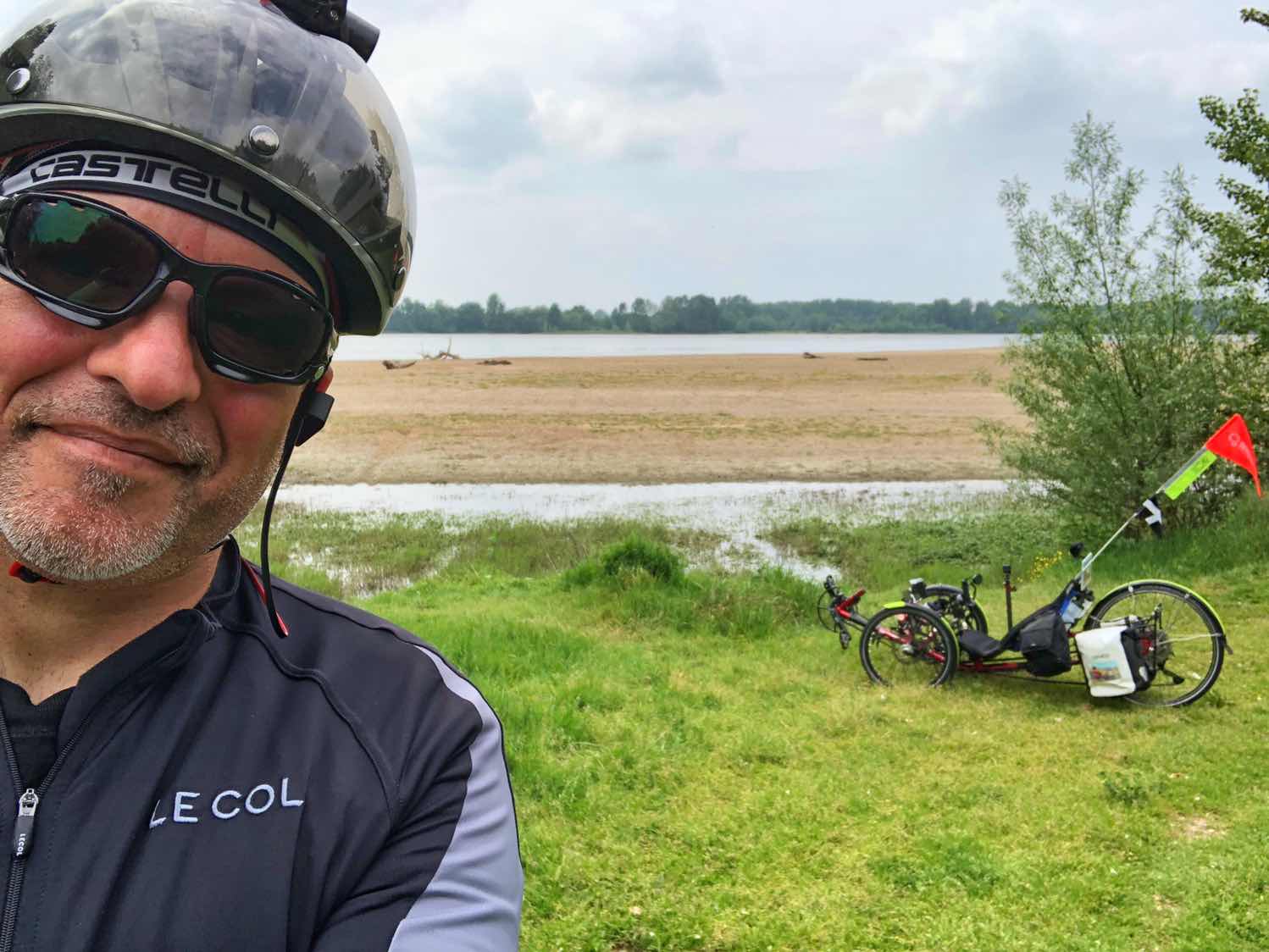 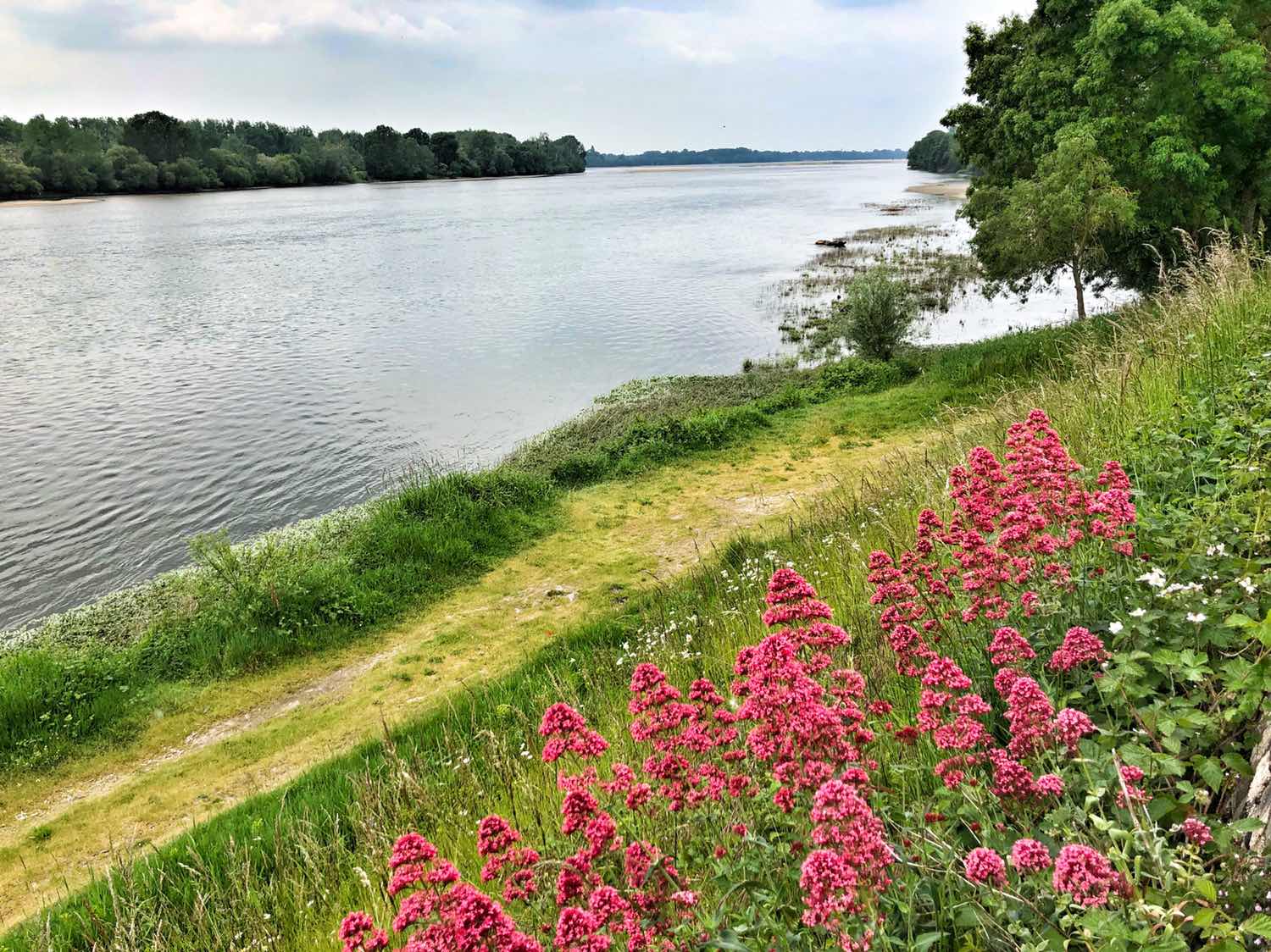 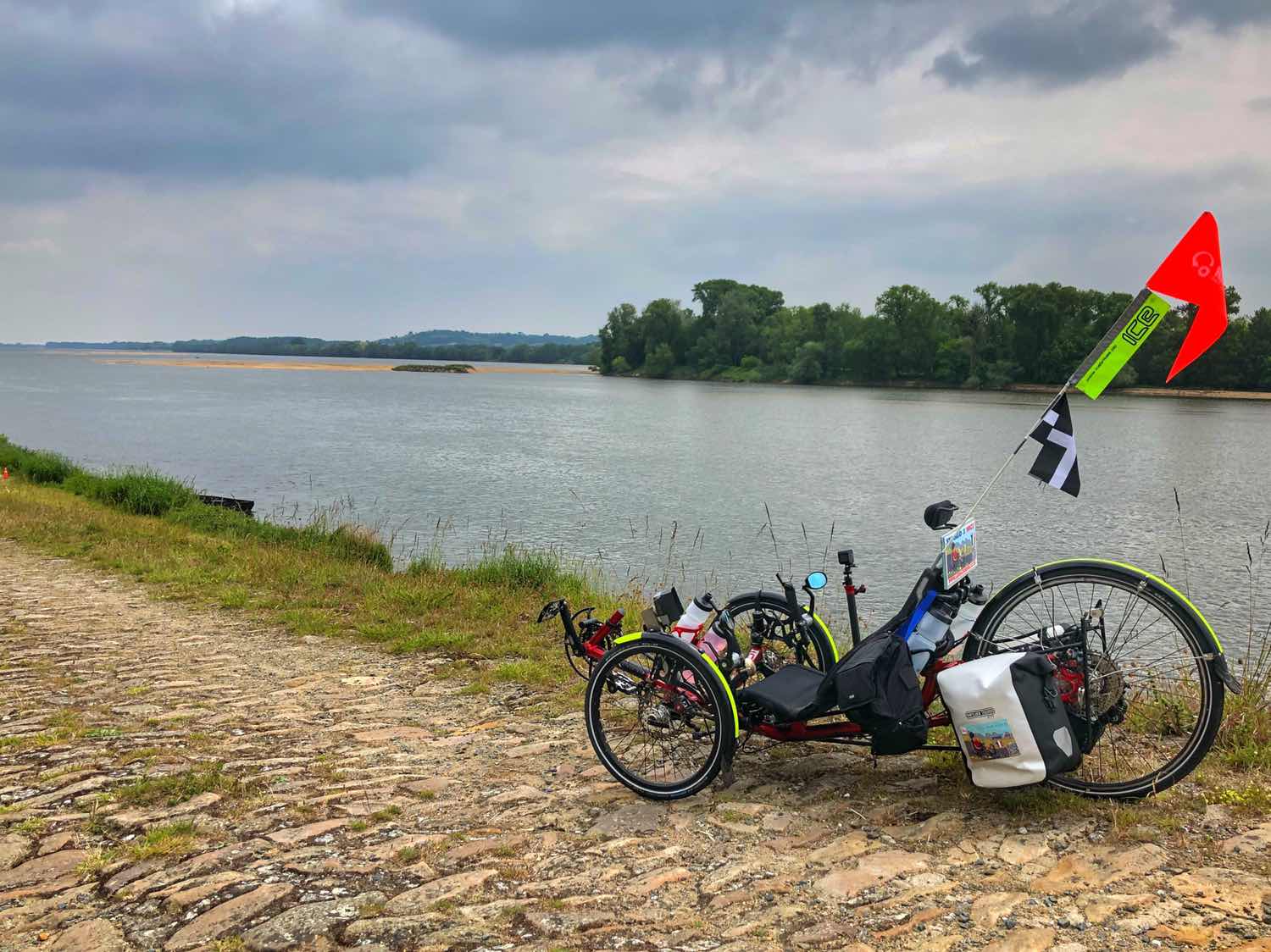 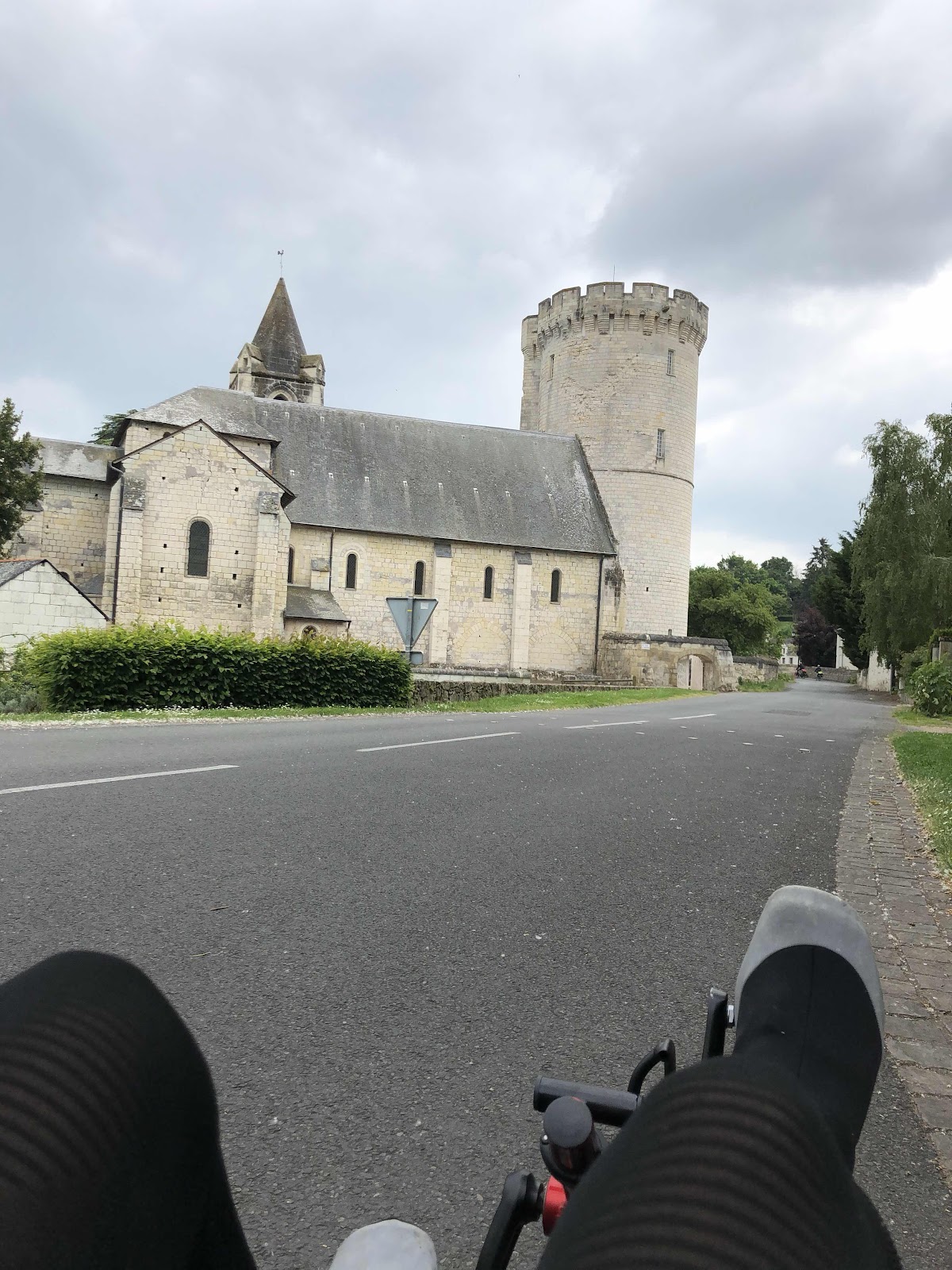 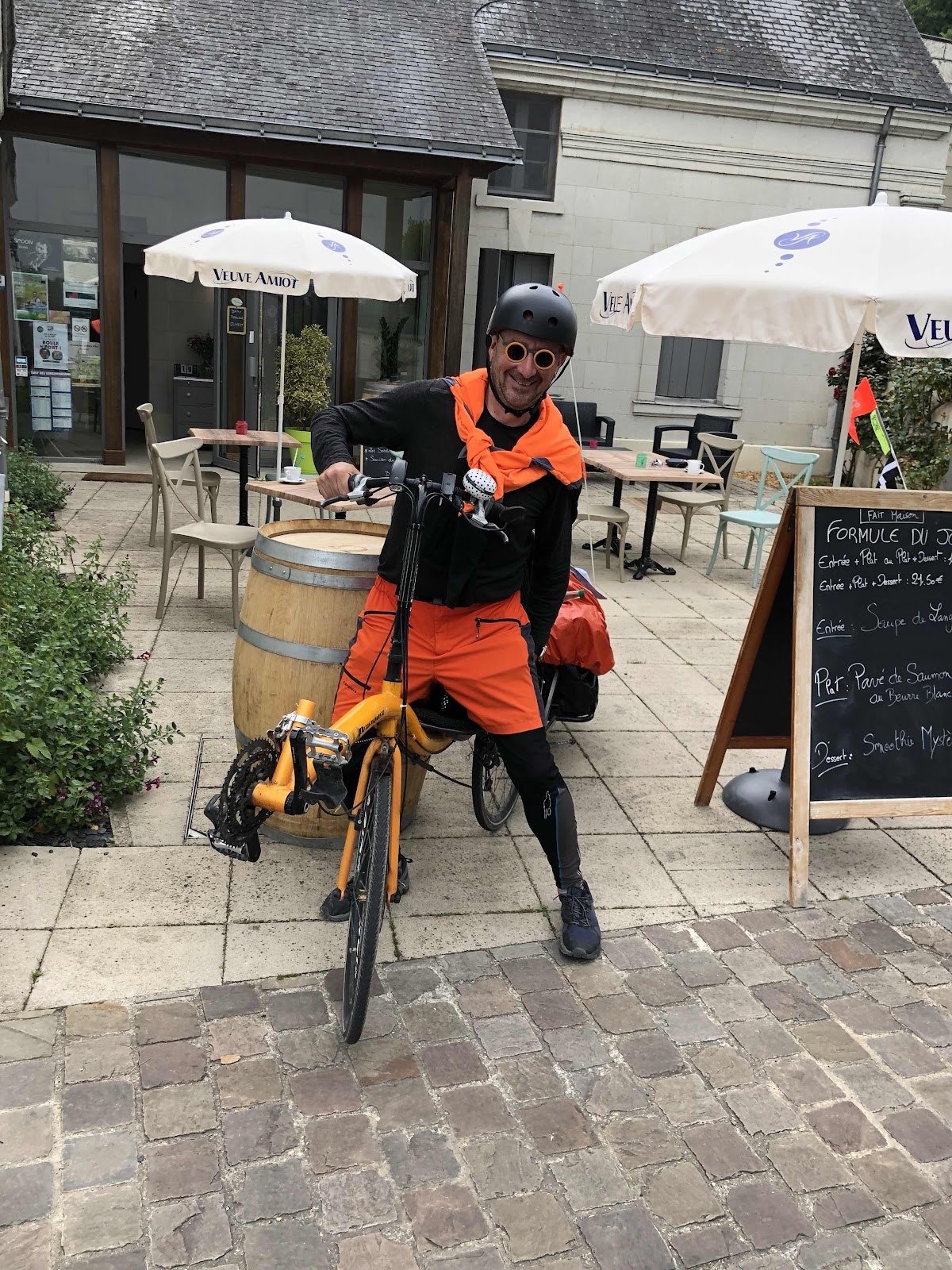 Jean-Claude I think he said is name was , he spoke no English at all and I speak pretty much the same amount of French. We gestured over a coffee and we came to the conclusion that his bike and trailer was slower than my Trike at going uphill. We shook hands and continued on. I barely got a 100 yards when I saw a little girl shouting and pointing “look papa look” he was busy on his phone so I pulled over . She was very excited about eight and through her dad I explained my trip and both were amazed I’d take on such a thing.. with only 7 miles left my legs were also thing the same thing!
With just a few miles left about to cross the river 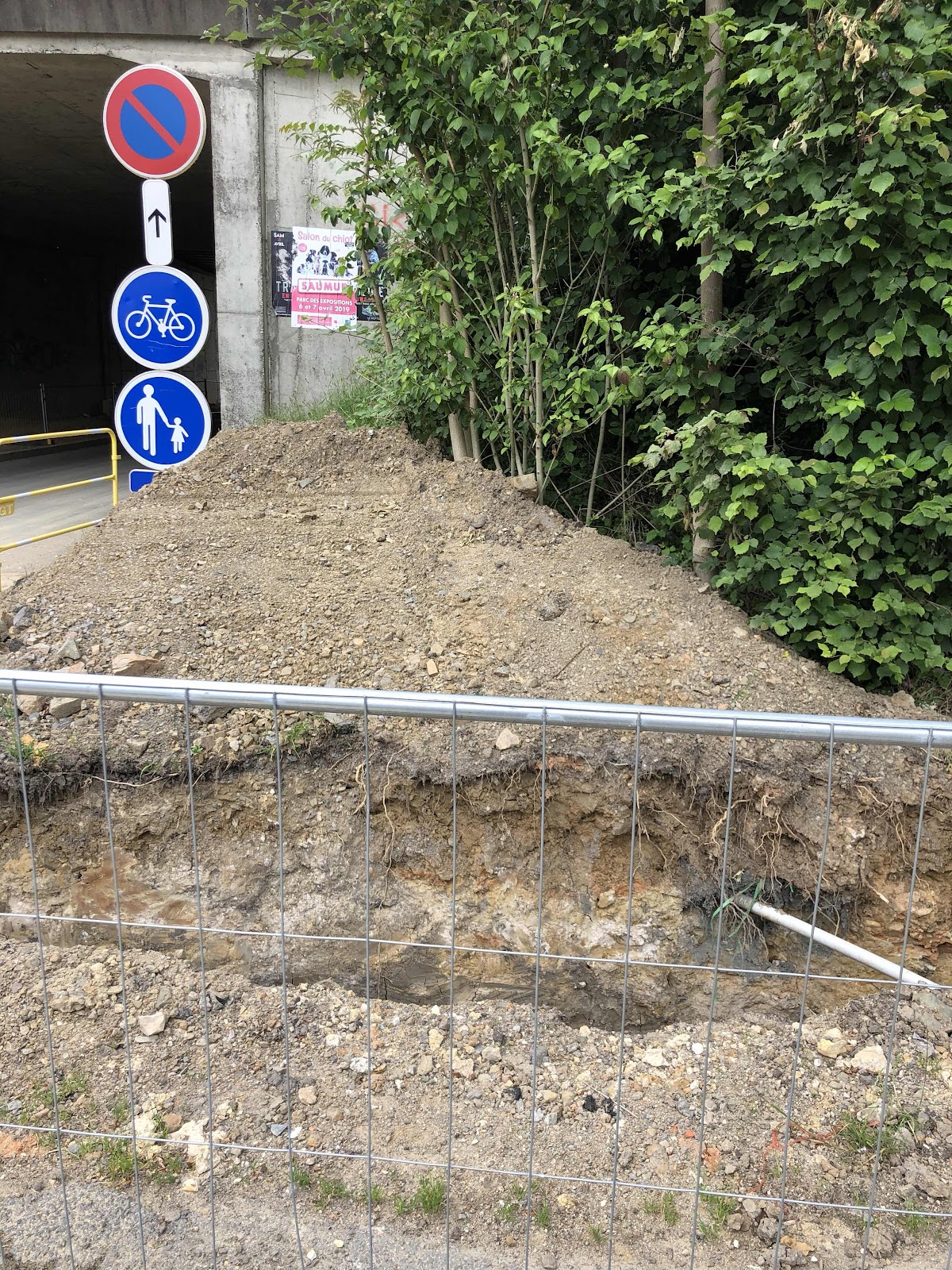 No cycle path oh well I’ll just pop back to the roundabout and go over on the road . Err clear signs indicating no bicycles on this road .. oh
A couple detours to find the secret entrance, some head scratching moments and a wave from another cyclist and the passage was found. Day 2 done .

And so let’s see how we get on tomorrow .
bonne nuit
👍🇬🇧🇫🇷